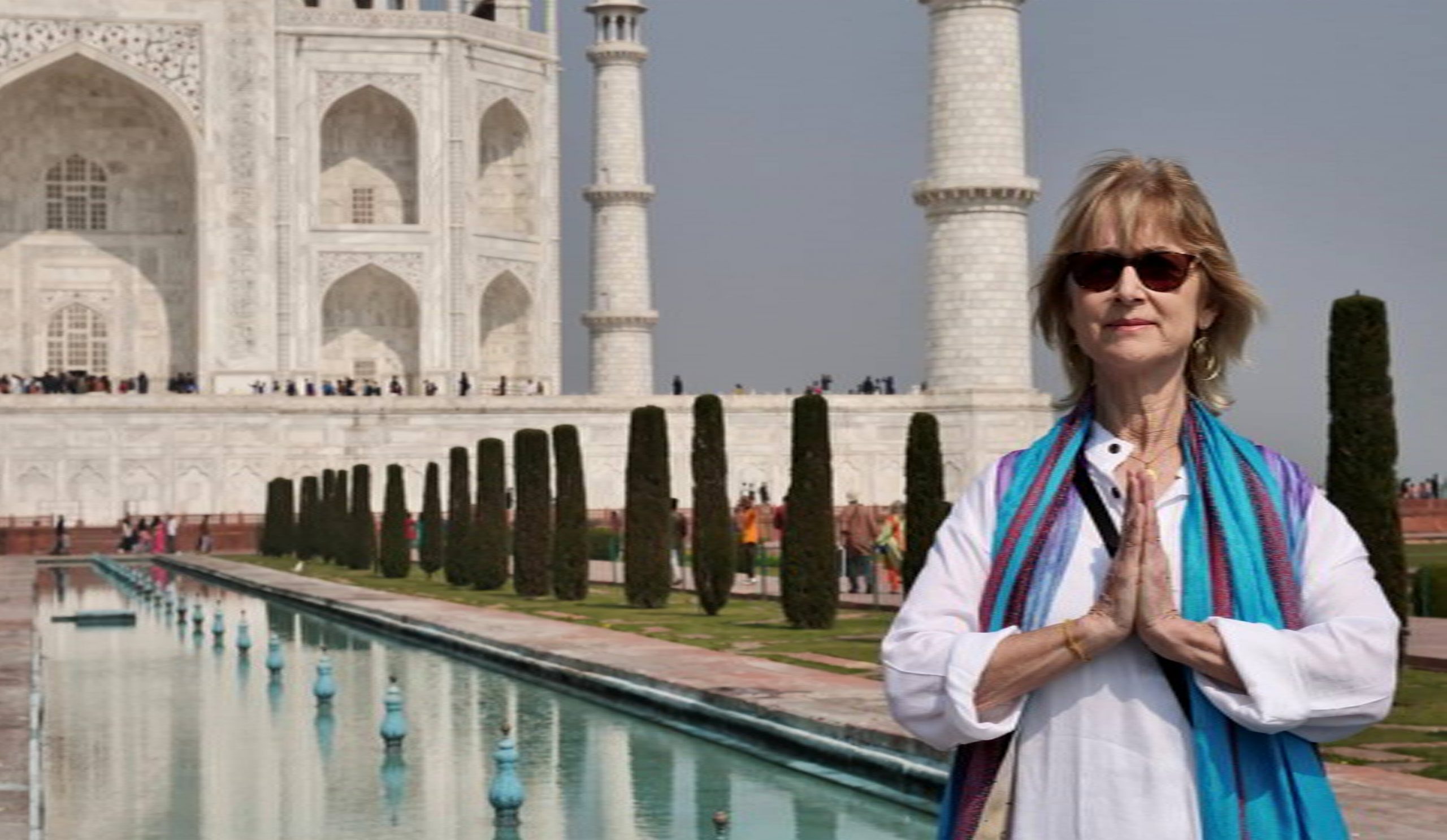 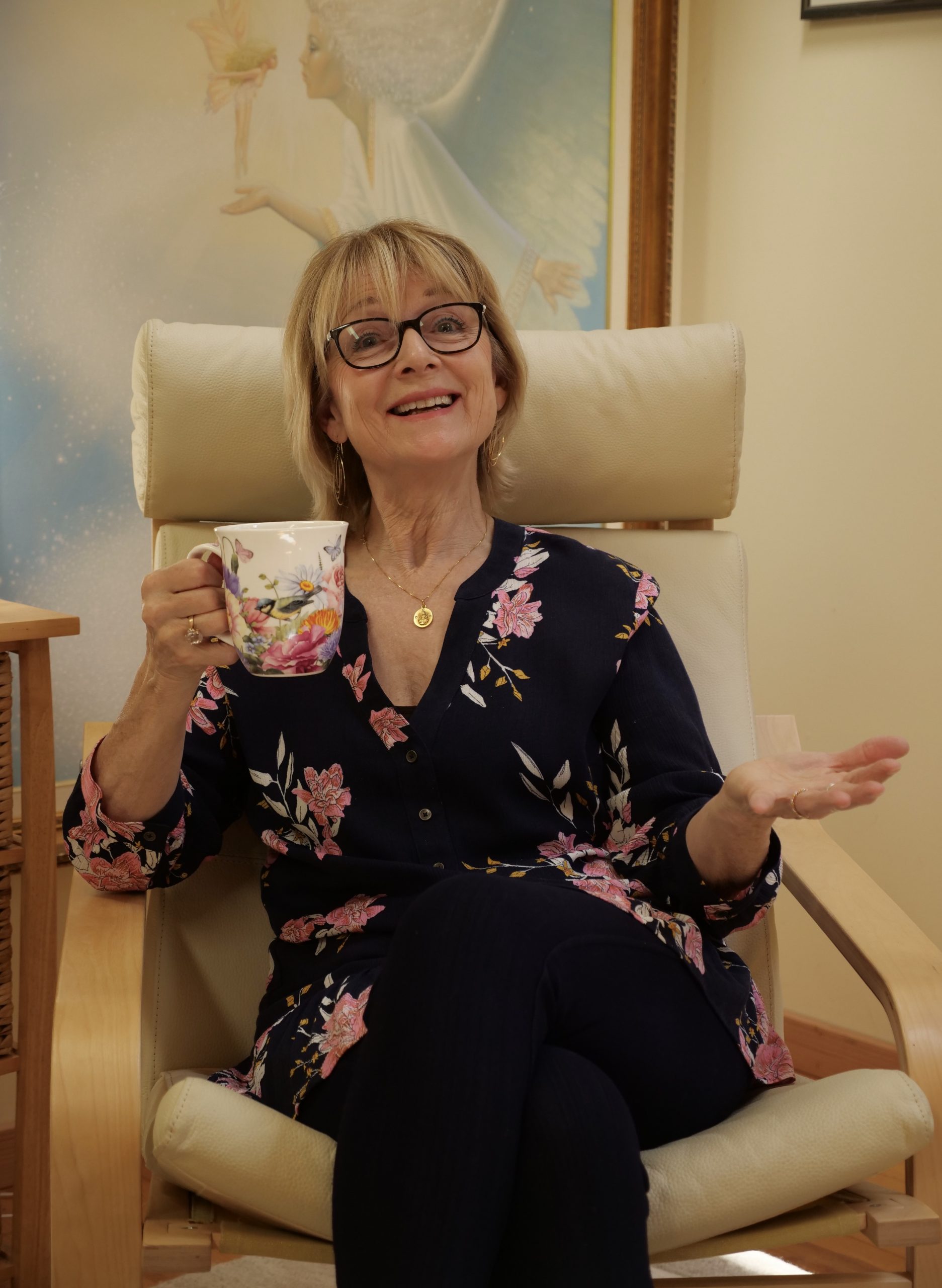 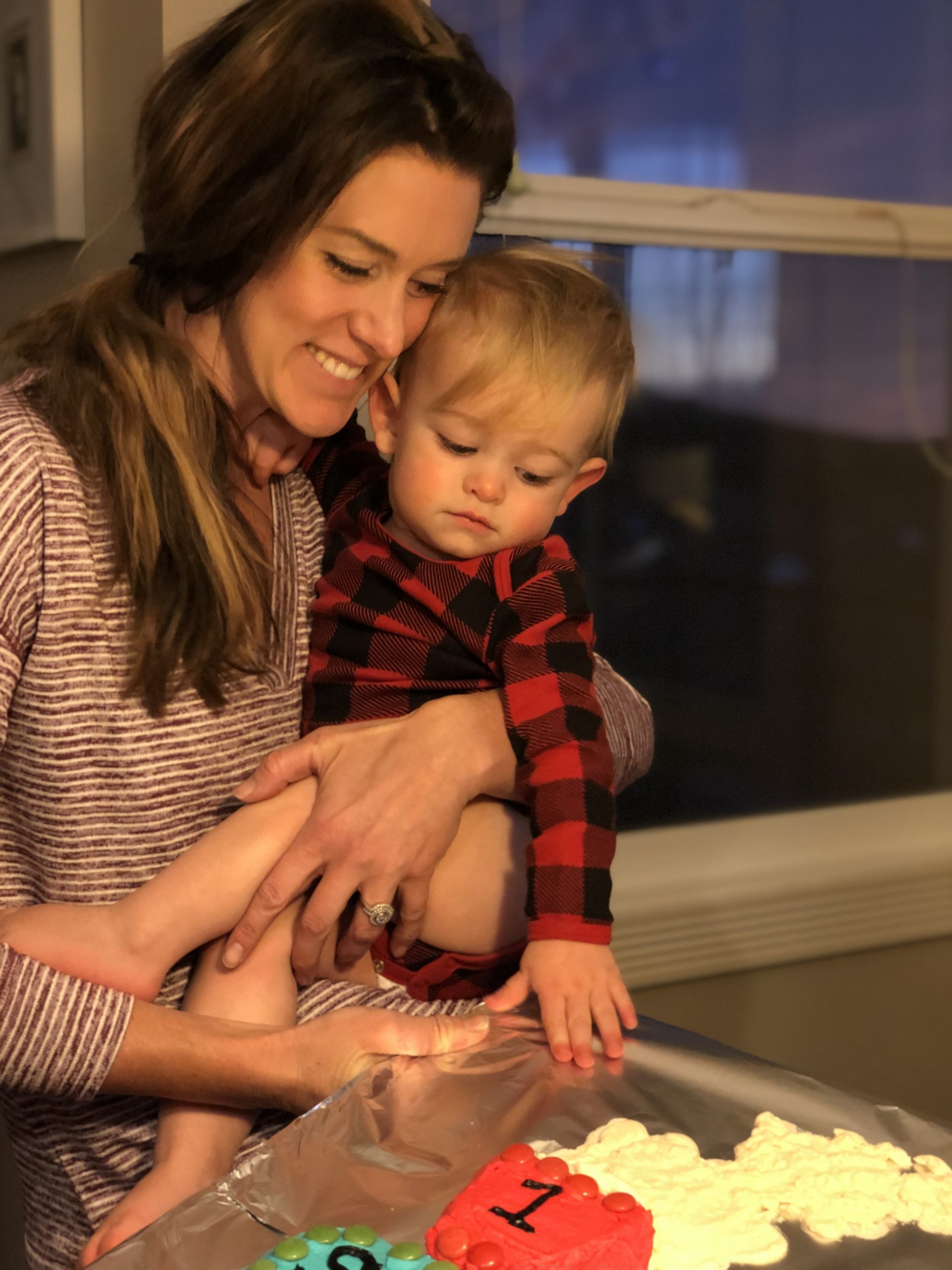 Angelyn, born and raised in England, traveled the world expecting to return to her homeland but there was another plan in store that led her to Vancouver, Canada and a corporate career.  After a decade working in advertising, CJOR radio and then as a consultant in communications and interpersonal skills, she withdrew to a treehouse on Bowen Island in 1986 for a sabbatical, to re-assess her life. On the last day of her time at the treehouse, she left with her husband and pregnant.

Her greatest joy of all, nine months later, was the birth of her beautiful daughter Kasara, in 1987.

FAST FORWARD: A big passion of Angelyn’s has always been horses, and her most favourite times were riding with her daughter, who had the same passion as her mother.  It was a wonderful surprise when her daughter chose a career in the equine world. Kasara is now a Doctor of Veterinary Medicine. And now she and her husband Mitchel gifted Angelyn with a beautiful grandson, Sawyer. She loves being a Nanna to Sawyer, the sweetest and most loving soul. She dedicated her book Radical Trust to him.

In 1994, Angelyn purchased a thirty-eight-acre, broken-down, old sheep farm to begin her Vision of a Sanctuary in nature where people could come to relax, unplug, and allow their creative muse to awaken. Xenia Creative Development Centre was born.

The transformation involved a huge undertaking and a labour of love and dedication. It involved the support of hundreds of volunteers and hundreds of thousands of dollars.

A decade into the initiative, Angelyn underwent major financial stress and nearly lost her beloved Xenia back to the bank. At one point, she fell five months behind on the mortgage, three years behind in property taxes, and received disconnection notices. She refers to this time as her dark night of the soul. It lasted two long years.

In 2005, Relationship Marketing came into her life and, at first, she almost didn’t recognize it as the miracle for which she had prayed. It happened because of the fortitude of a colleague, who had visited her Retreat Centre many years earlier and strongly suggested Angelyn take a look at a business vehicle. A vision they both shared was to bring together leaders from around the world to have an impact on education, health, and business.

Many years later, Angelyn cannot believe the transformation in her life and in the lives of those with whom she has worked. She has a wonderful team of loyal and dedicated people.

Angelyn won the Associate of the Year Award for North America, for exemplary leadership, and got inducted into the Millionaire Club, having personally earned one million dollars within a few short years. She served on the Field Advisory Board of her company for several years and was the top income earner in Canada. Later, she won the company’s highest award for Leadership, Integrity, and Service, the Yun Ho Lee Award. https://www.youtube.com/watch?v=Rh_LtPBck00. The year after, she won the award for Leadership Excellence. Having a successful Relationship Marketing business not only sustains her Retreat Centre, but she also loves her life and the freedom it allows. The biggest surprise of all was finding the perfect partnership and parallel path with her work of transformation. It fulfills her desire to serve others to awaken their greatest gifts and talents.

Her passion for animals and transformation got combined in her book: From Squeak to Roar, Unleashing the potential in your Relationship Marketing Tribe.

Angelyn leads programs at her Retreat Centre and is developing a Global Program in collaboration with a faculty of conscious entrepreneurs to change the way we do business, education, and life in general.

Her latest book, Radical Trust, Manifesting a Vision When it Seems Impossible. It is a story about waking up out of the swamp of confusion the mind serves up, into something far deeper that knows the truth and guides us. This book is about listening to and acting upon the messages life delivers by way of symbols, relationships, and encounters. Radical Trust helps the reader find the courage to follow their individual path and deliver the gifts with which they were born. It is, ultimately, a story of inspiration and transformation on many levels and in profound ways. 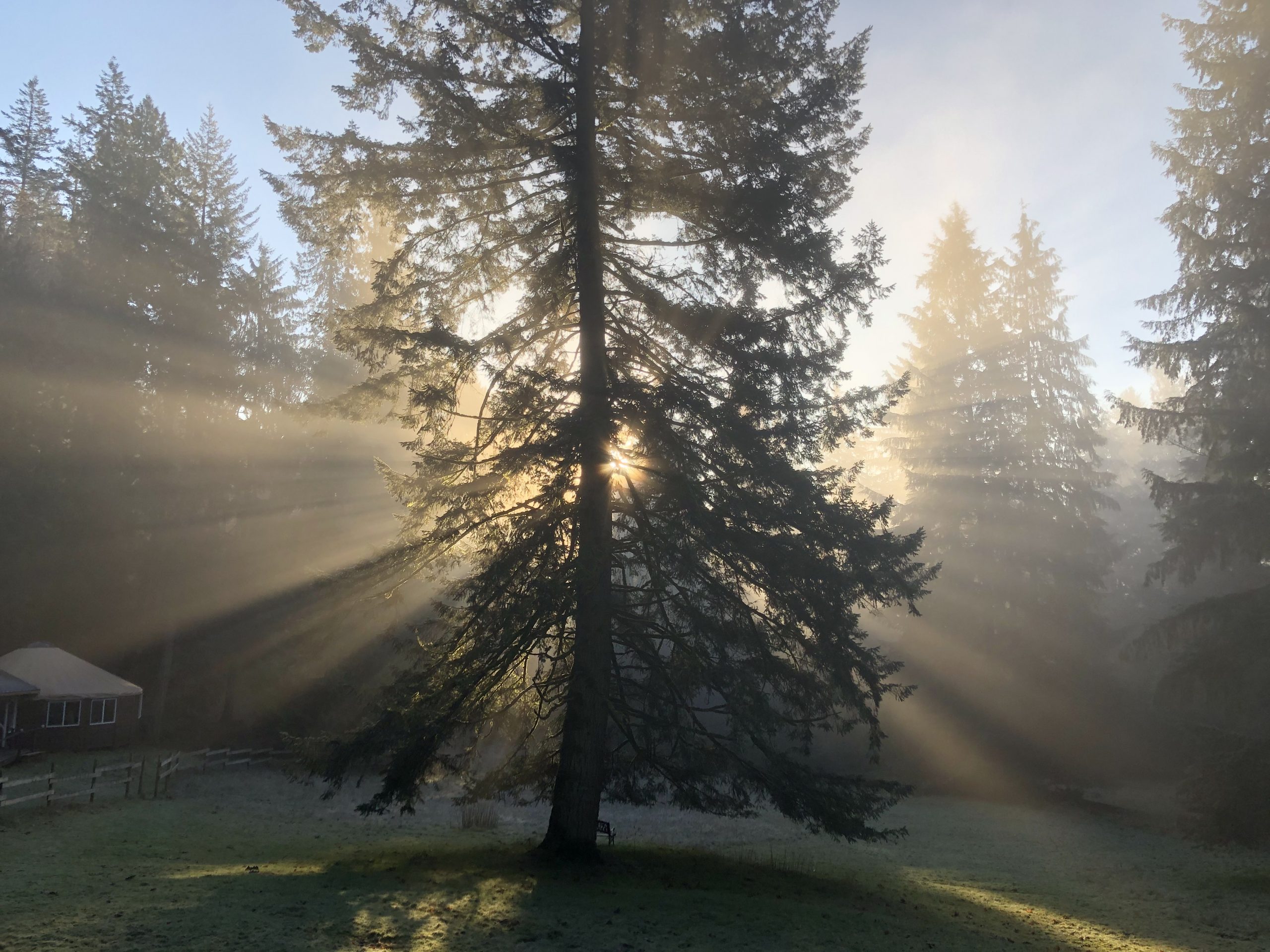 I Thought This Miraculous, Spiritual Experience Was In The Land

In the 22 years I have owned this land, I have watched it transform from an old dilapidated sheep farm into a glorious 38 acre-Sanctuary, where thousands of people from around the world have had this exact experience. Our guest books are filled with people’s gratitude and experiences of feeling deeply at home. 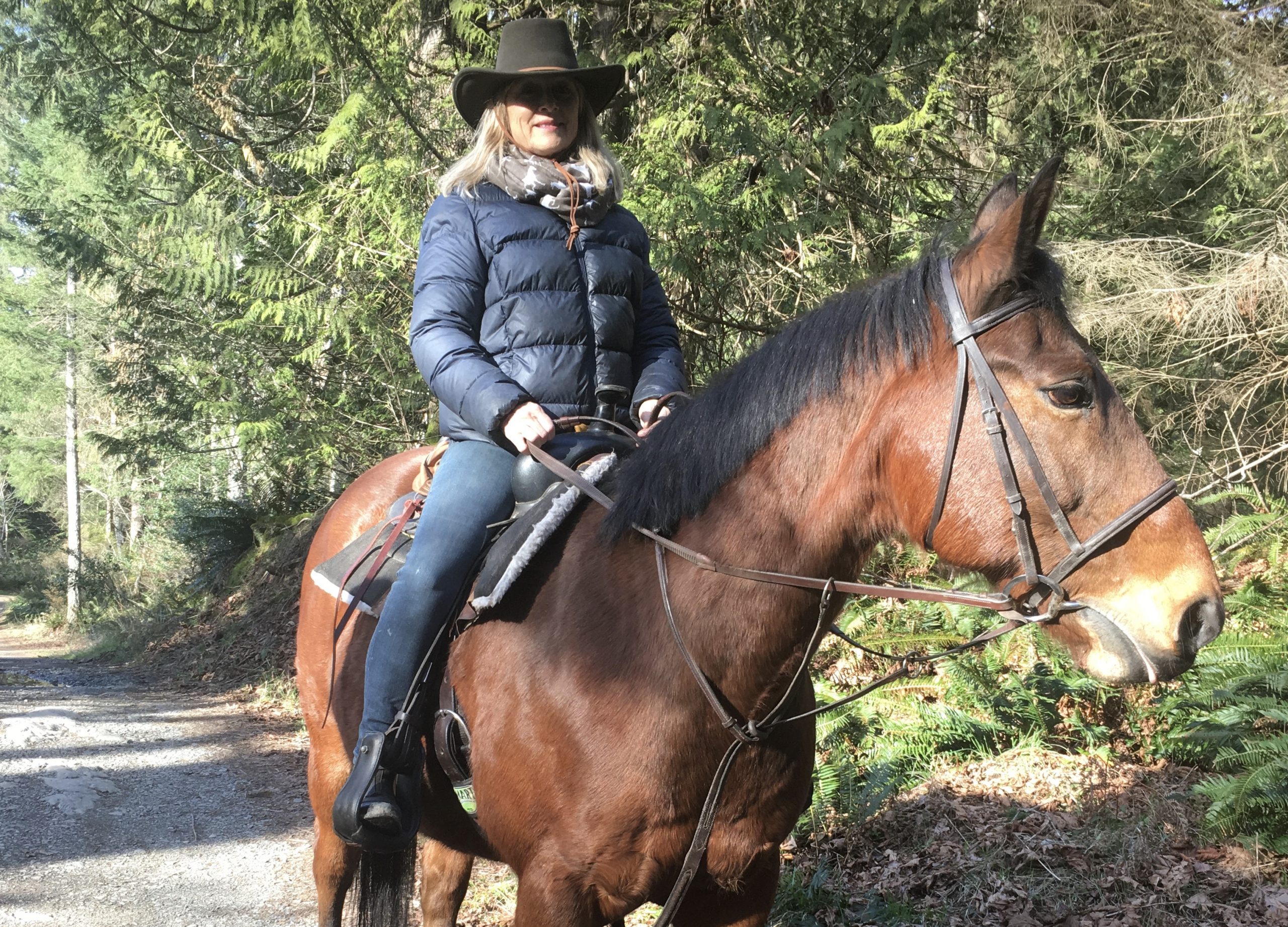 I grew up on the back of a horse. It was my passion, my life and my study. To understand the horse is to understand ever.....
Read More 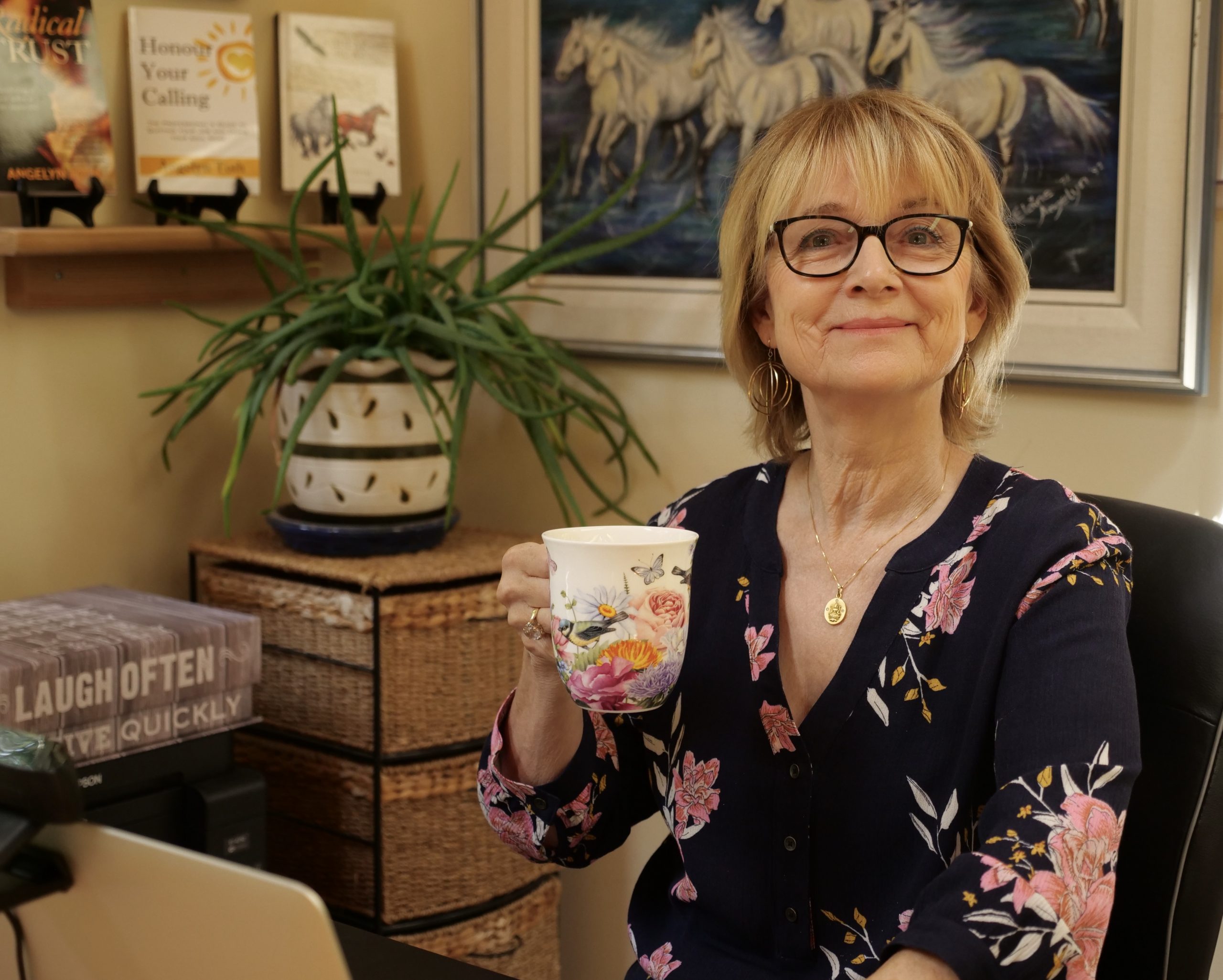 What is Tea with Angelyn?

What is “Tea” to Angelyn? I was born in England and tea was the fundamental staple regime of every class whether it.....
Read More

1914 translation by H. Rackham “But I must explain to you how all this mistaken idea of denouncing pleasure and prais.....
Read More